There has been detected important differences while comparing NDVI values from different sensors.
This report gathers the conclusions on the validation.

For July 15th 2019 drone images are available, July 16th 2019 satellite images from Sentinel (10m/pixel) and with E-STRATOS provider (3,5m/pixel).
On this comparison has been evaluated:
• Spatial variability of the structure on different resolutions.
• Average per plot on NDVI value

The results show a remarkable difference between different sensors NDVIs. The differences are exclusively from every sensor response. Is known and published that the comparison of reflectancy and vegetation indices between different sensors for the same or different dates shouldn’t be done unless a crossed calibration is available. The atmosphere reflected light is processed different on each sensor, depending of other factors: type of lens, sensor type, sensor sensitivity, light incidence angle, sensor off-nadir angle, etc. There are different ways of calibration to correct those effects which takes one of the sensors as a base and transform the signal of the other ones to provide an equivalent response. The two most used methods are:

• Spectral Band Adjustment Factor (SBAF)
• Absolute Radiometric Calibration: See method of Govaerts et. al. 2013 y Helder et. al. 2013
In order to make those crossed calibrations PICS(pseudo-invariants calibration surfaces) are required and should show and be visible on each sensors frame taken.
Those NDVI differences are already reported on E-STRATOS provider tecnical documents and those differences are due to SBAF missing calibration.

Because of that, on E-STRATOS we have always considered that the combination of different image source on the aim of comparing was not a reliable tool if there is no sensor cross calibration. Due to that, NDVI evolution lines are always show by the same satellite and don’t combine with other sensors.
In addition, from the technical specification of E-STRATOS satellite image provider, this verification about SBAF calibration concerning reflectance values of the images and calibrated respect Landsat 8.
“A more direct comparison of surface reflectance requires adjusting for differences in sensor response. Figure 8 shows PL and Landsat 8 spectra for a single collect of the field when the crop is near peak. The PL and Landsat images were taken on the same cloud-free day and the PL reflectance values have been corrected relative to Landsat using SBAF multipliers calculated using the spectra for grass taken from the JPL ASTER Spectral Library5. The PL surface reflectance shape shows good agreement with both Landsat 8 and the reference spectrum with differences in NDVI and EVI of approximately 6% and 5%, respectively.” 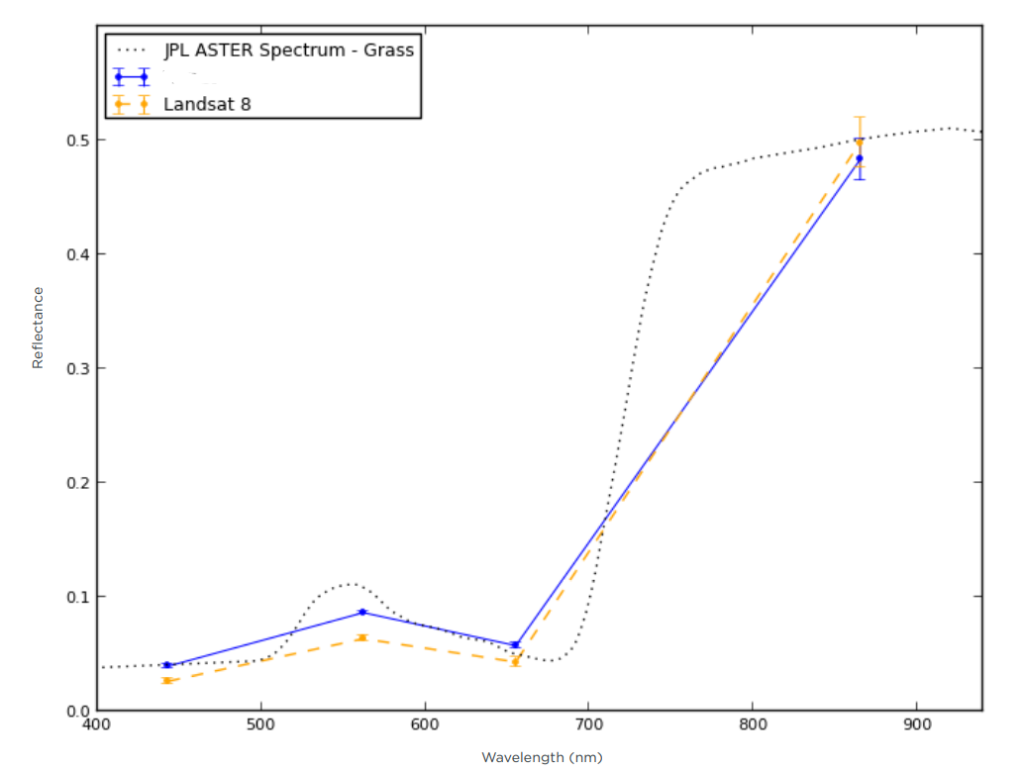 Regarding the data on E-STRATOS on crop management, the analysis performed during the platform development and on this specific case, on this specific plots, the results show us that the structure of variability is comparable between sensors. E-STRATOS data is better related with Dron data than Sentinel 2. We user quantile division to avoid noise and the aggregated variability structure is adjusted perfectly on 3 classes. 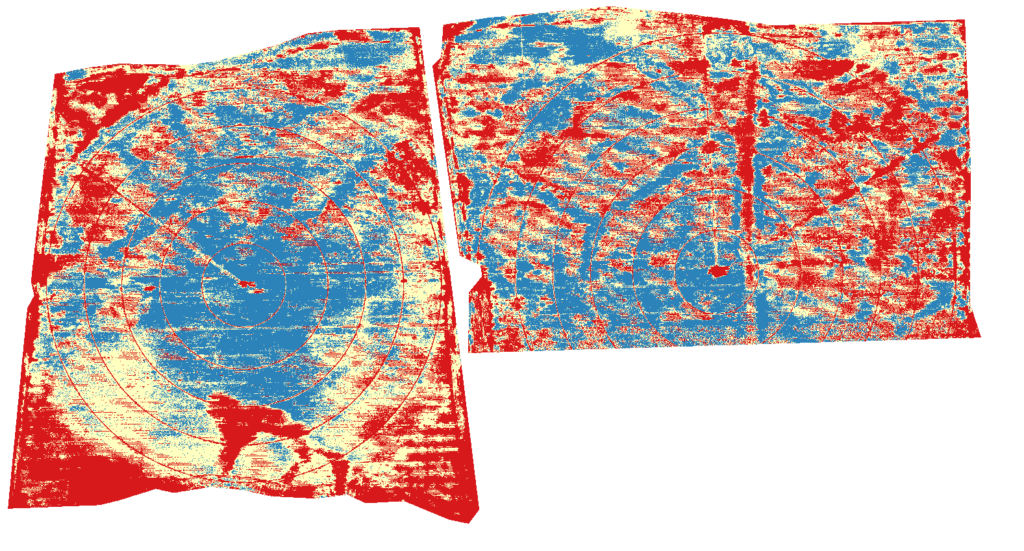 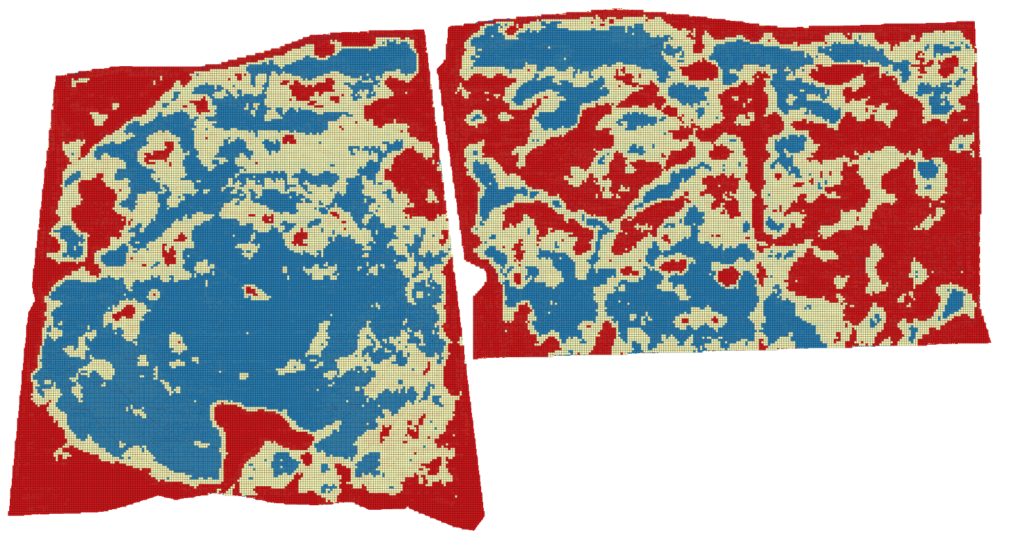 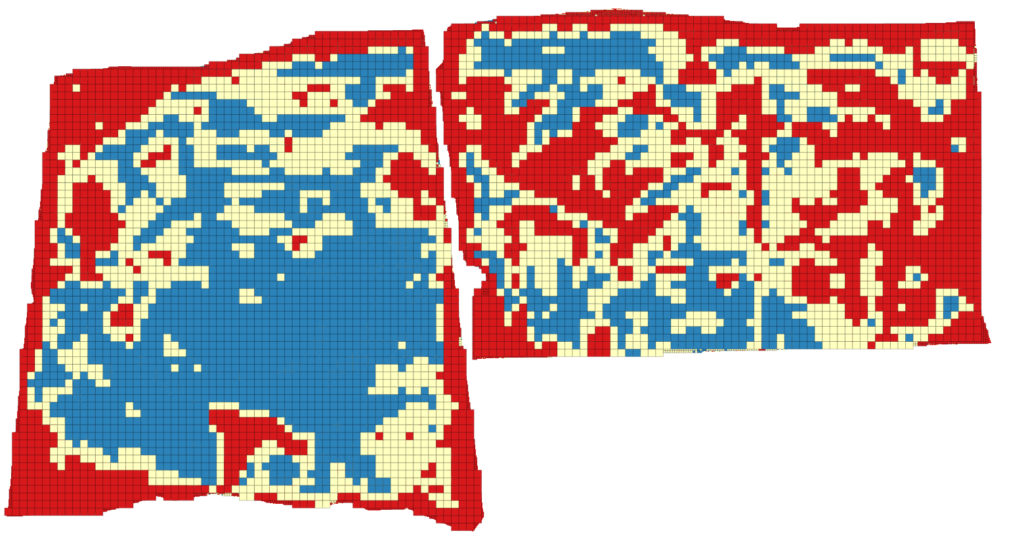 Likewise, if the evolution comparison of average vigor per plot is done by the same sensor, the data is well formed and provide the tool E-STRATOS is aiming to offer.

The data provided by E-STRATOS is consistent, comparable and reliable due to the selection of source images.
The divergence on the NDVI values from different sensors are due to missing calibration between them(see the book Comprehensive Remote Sensing, ELSEVIER, Ed. Chief Shunlin Liang, paragraph 1.17.2.2.6, y Computer Processing of Remotely-Sensed Images, Whiley, Paul M. Mather, pag 112-116).
In order to do the comparison, is mandatory data cross calibration taking as a base value Dron, Sentinel 2 or E-STRATOS data and adjusting the other sensors to them.

We use cookies on our website to give you the most relevant experience by remembering your preferences and repeat visits. By clicking “Accept”, you consent to the use of ALL the cookies.
Cookie settingsACCEPT
Manage consent

This website uses cookies to improve your experience while you navigate through the website. Out of these, the cookies that are categorized as necessary are stored on your browser as they are essential for the working of basic functionalities of the website. We also use third-party cookies that help us analyze and understand how you use this website. These cookies will be stored in your browser only with your consent. You also have the option to opt-out of these cookies. But opting out of some of these cookies may affect your browsing experience.
Necessary Always Enabled
Necessary cookies are absolutely essential for the website to function properly. These cookies ensure basic functionalities and security features of the website, anonymously.
Functional
Functional cookies help to perform certain functionalities like sharing the content of the website on social media platforms, collect feedbacks, and other third-party features.
Performance
Performance cookies are used to understand and analyze the key performance indexes of the website which helps in delivering a better user experience for the visitors.
Analytics
Analytical cookies are used to understand how visitors interact with the website. These cookies help provide information on metrics the number of visitors, bounce rate, traffic source, etc.
Advertisement
Advertisement cookies are used to provide visitors with relevant ads and marketing campaigns. These cookies track visitors across websites and collect information to provide customized ads.
Others
Other uncategorized cookies are those that are being analyzed and have not been classified into a category as yet.
SAVE & ACCEPT
Go to Top